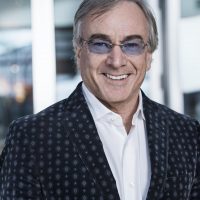 Passionate about the world around him, Daniel’s enthusiasm sparks curiosity in others. As an advisor, he alleviates the fears business men and women have about operating on a global scale.

A natural storyteller, his best advice is usually delivered as a story from his rich personal experience. As he draws on his successes and failures, his preferred weapons of choice are laughter and humility.

As the former Executive Vice Chairman of the Board, Cirque du Soleil Entertainment Group, Daniel Lamarre is responsible for nurturing the delicate balance between the company’s global strategy (across five continents), its financial growth and stability, and the integrity of its culture and values. Among his greatest achievements include the execution of complex negotiations resulting in signed agreements with THE BEATLES and MICHAEL JACKSON’s estate.

In 2012 he collaborated on the creation of C2MTL Conference, a one-of-a-kind coming together, in Montreal, Canada, of the creative and business elite of the world. It is a platform for exploring creative answers to commercial questions. In line with his belief that without creativity, there is no commerce.

Daniel’s outlook is resolutely international, but his roots are firmly set in his tiny hometown of Grand-Mère, a small town located in the French part of Canada. This strong sense of self and values is fundamental to how Daniel does business, but is also a source of great personal satisfaction.

He has been honoured with Doctorates from McGill University, and his alma mater the University of Ottawa.

This website uses cookies to improve your experience while you navigate through the website. Out of these, the cookies that are categorized as necessary are stored on your browser as they are essential for the working of basic functionalities of the website. We also use third-party cookies that help us analyze and understand how you use this website. These cookies will be stored in your browser only with your consent. You also have the option to opt-out of these cookies. But opting out of some of these cookies may affect your browsing experience.
Necessary Always Enabled
Necessary cookies are absolutely essential for the website to function properly. This category only includes cookies that ensures basic functionalities and security features of the website. These cookies do not store any personal information.
Non-necessary
Any cookies that may not be particularly necessary for the website to function and is used specifically to collect user personal data via analytics, ads, other embedded contents are termed as non-necessary cookies. It is mandatory to procure user consent prior to running these cookies on your website.
SAVE & ACCEPT